Through the United Nations Charter, virtually all States in the world have expressed their commitment “to save succeeding generations from the scourge of war”. They have agreed to renounce the illegal threat or use of force, and to settle their disputes “by peaceful means in such a manner that international peace and security, and justice, are not endangered”. States have the legal duty to abide by this commitment END_OF_DOCUMENT_TOKEN_TO_BE_REPLACED 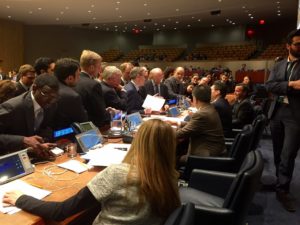 dency of Liechtenstein’s UN Ambassador, Christian Wenaweser. Following the activation decision on 15 December, Ambassador Wenaweser recalled that “the Court’s jurisdiction is determined by the Rome Statute and States Parties are not only committed to the independence of the Court, but have an obligation not to infringe upon its mandate. We have expressed repeatedly our view that the Court’s jurisdiction relating to the crime of aggression is founded in articles 15 bis and 15 ter, which were adopted by consensus in Kampala. Article 15 bis paragraph 4 in particular is itself based on article 12 of the Rome Statute in which is enshrined the cardinal principle of the Court’s territorial jurisdiction.” The historic decision to activate the ICC’s jurisdiction over the crime of aggression not only completes the Rome Statute as originally drafted, but also reinforces the Charter of the United Nations and will help to deter aggressive war-making in the future.

From Nuremberg to New York: Historic Opportunity to Activate ICC Jurisdiction over Crime of Aggression (VIDEO): In December 2017, the first permanent independent international criminal court in history stands on the brink of having the jurisdiction to hold national leaders accountable for the illegal use of force against other states. The 1998 Rome Statute established the International Criminal Court, an international court that has jurisdiction over genocide, crimes against humanity, and war crimes as well as the crime of aggression. But, the States Parties to the ICC could not agree to the definition of the Crime of Aggression until 2010, when a diplomatic breakthrough in Kampala, Uganda finally produced consensus on the international legal definition of the crime.

From Nuremberg in 1945 through Tokyo, Rome, The Hague and Kampala, this film tracks the legal and moral debate more than seven decades in the making. History can be made in New York in 2017 when the States Parties of the International Criminal Court have the opportunity to activate the court’s jurisdiction over the Crime of Aggression.